The state series races are: 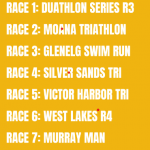 Only 1 Tier can be accrued by an individual athlete at a race (i.e in the event of an athlete racing two races within a weekend festival of races the highest accrued tier of points will be applied

Only members of Triathlon SA are eligible to earn state series points and you must be a current club member at the time of the event.

Any member who races Open in 2 or more races will not be eligible for an Age Group award.

Tier 1 Points are as follows

These awards will be pulled from the following race (The Olympic Distance.)

Good Luck and enjoy the season